Oxy-fuel cutting is not a new term; in fact, it is widely known in the metal-work industry. This technique has been around for decades and is used by CNC machines to cut steel of various shapes and sizes.

A lot of people are conversant with this subject, but only a few know how it works. There is no need to feel out of place if you are among them – of course, we can’t know it all. Various terminologies like “flame cutting”, “torch cutting”, “burning” are associated with this process. In oxy-fuel cutting, an oxy-fuel cutting torch is used to cut steel. Additionally, a chemical process that takes place during this process is known as steel rapid-rusting. Regardless of what people call it – rusting or burning – the results are the same. Also, there is a chemical reaction when pure oxygen is added to the fuel in processing the steel which causes it to oxidize. But before we proceed, we need to know what this technique is and how it was discovered. 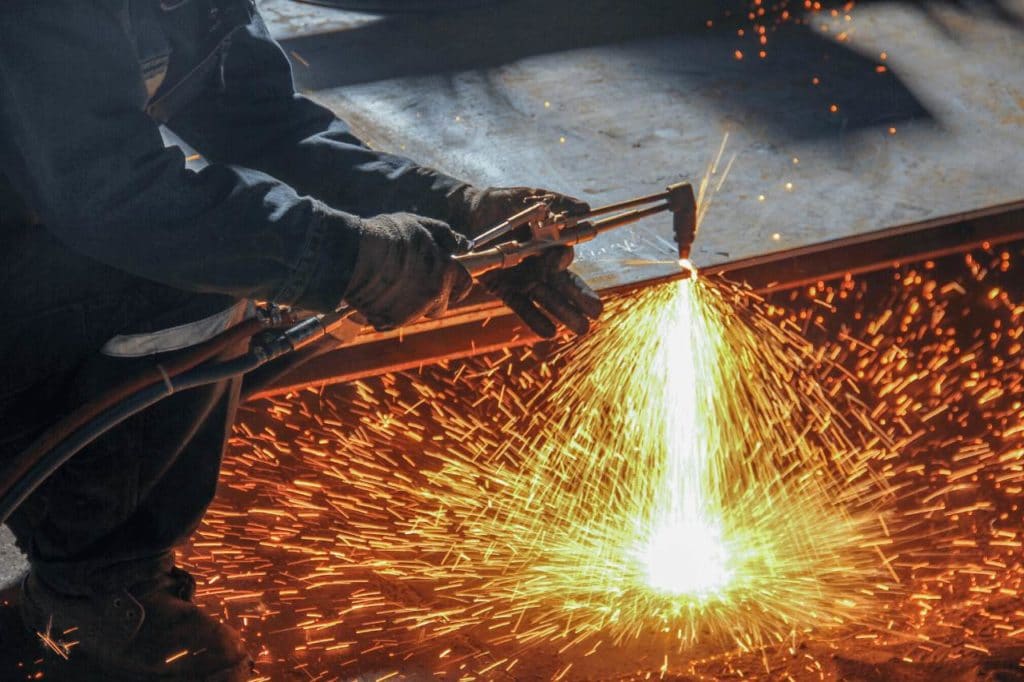 The oxy-acetylene welding process was discovered by two French engineers, Edmond Fouché and Charles Picard, in 1903. As stated earlier, in this technique, pure oxygen is used to increase the temperature of a flame, substantially.

When this chemical element is combined with fuel like acetylene, the temperature can be increased to about 6,332 ℉. In localized melting, an oxy-fuel cutting torch is used to cut or weld steel under a room environment. This innovation has led to a transformation in the industrial world. Aside from pure oxygen, other gases are used as well, such as hydrogen, liquified petroleum gas, natural gas, propane, and propylene.

There are several steps involved in cutting steel using oxyfuel cutting machines. Let’s take a quick look at how it all works.

Prior to cutting steel, you need to heat it to a desirable temperature of 1,800 ℉, which makes it easier for the material to easily react with oxygen. This heat is generated via an oxy-fuel torch in the form of preheating flame. It is important to note that oxygen combines with a fuel gas to produce the preheated flame which is then conveyed through a nozzle that has been designed to create several little jets. Another fact worth mentioning is that the fuel and pure oxygen ignites outside the nozzle, which, in turn, forms the preheat flames. You can produce small flames with extreme temperatures by adjusting the fuel-to-oxygen ratio; this is important in concentrating the heat on a small surface area.

The surface of the plate needs a certain degree of heat (kindling temperature) and a jet of pure oxygen to begin the piercing process, which is better referred to as the “cutting oxygen”. Rapid oxidation, also known as an exothermic reaction, begins as soon as the cutting oxygen comes in contact with the pre-heated steel. At this point, the solid steel is molten. However, the new substance needs to be eradicated for the cutting oxygen to pierce through the plate completely. Although, the time it takes to accomplish this task depends on the thickness of the plate. As the cutting oxygen goes deeper into the plate, the molten slag is removed from the pierced hole.

As soon as the cutting oxygen successfully pierces through the plate, the oxy-fuel cutting torch is being used to create a continuous cut at a fast pace. However, you need the preheat flame to successfully cut the plate, as the heat produced by the chemical reaction generated from the oxygen and heat combination is not enough. Factors like speed, plate temperature, preheat flame adjustment, cut oxygen pressure, and cutting height may affect the cut edge quality.

Also, not all metals can survive this process, as most of them are oxidized, which gives them a higher melting temperature than other metals.