There’s a lot of money that goes into funding the forces in every country and there are many people that believe we would be much better off without any of it, but in reality, there are things that the military spending does for the public and they won’t even realize. Not only do they serve and protect the country, but there’s a lot more to their spending than meets the eye. 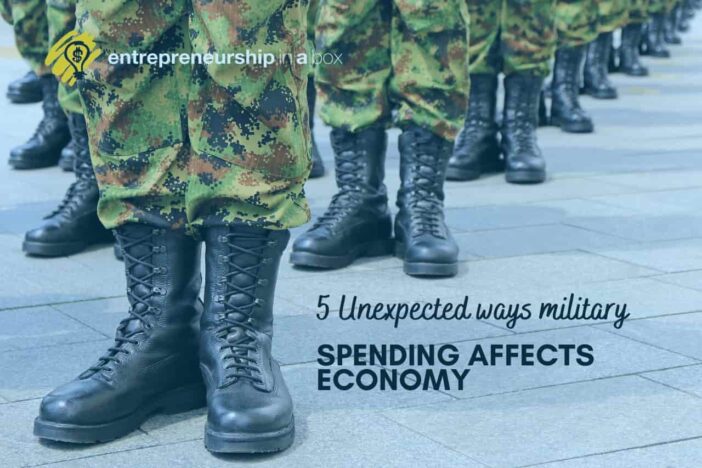 Here we are going to take a look at the ways in which military spending affects the economy.

The most basic way in which military spending affects the economy is employment. There isn’t an army on the planet without people in and that’s because we are needed. When humans are needed for a job they are compensated with money and a contract. Money for their duties and a contract to look after their legal rights.

With armies being so large in countries such as the U.S and the U.K there are many troops to consider. Such a large volume of soldiers means there’s a lot of money heading out to each and every one of them which will be spent in the local economy where they live. They might even use it to buy a house that helps the property markets. The more people employed by the military, the more money heading back into the economy.

With an army on the planet, you need people to carry out the jobs that they have to do. When there are lots of people around, then it is safe to assume that the country has plenty of work. More people working means more money flowing into the economy.

The Army can’t make everything themselves, not only do they not have the manpower (surprisingly enough) to concentrate on making all their equipment, they don’t have the overall knowledge. Someone in the Infantry might be able to take their weapon apart to clean it, but they won’t know what goes into making it in the first place. This goes for the majority of areas within the Army which means there is no choice other than sub-contracting work out to those that know how to make the equipment needed.

Every Army needs weapons and the larger the army, the larger the arsenal. When it comes to the U.S army there has been a squad favorite for years and has been the gun to lead them through many battles. The M4 Carbine was originally made by Colt in 1983 and was enlisted as the infantry standard by the U.S Army in 1994 and has been its staple up until recently.

There is a race to win the contract for the latest U.S army rifle and the contract is rumoured to be worth $1.5 billion Dollars. With that much money heading to a private company, it’s difficult to argue that it’s not going to be beneficial to the economy.

The army purchases tons of weapons and ammunition from private manufacturers. It should also be pointed out that there has been a steady growth in gun ownership by private citizens. Most of them are looking to get their hands on the best 80 percent lowers and assemble their weapons. There is something calming about assembling a firearm on your own.

The only way to win wars these days is by using the most up-to-date technology. Armies with the latest kit will plough their way through any barrier by any means, whether that’s with a troop of infantry soldiers or a hacker. With the constant development of technology companies have had to think quickly about how to appeal to the military market. When in battle, there is no chance a soldier is going to be working from an Apple Macbook whilst getting shot at, instead they need hardcore, rugged machines that will allow them to be thrown around without the chance of damage or losing any data.

This website shows the differences between each and every piece of equipment that’s needed for a front-line battle. Losing data can sometimes lead to losing wars completely, so having the right tech in the first place is essential. With the amount of money that’s in the technology sector, there’s no doubt that subcontracting tech companies to make improved versions of computers is good for the economy.

Propper is a contractor used by the U.S army for their uniform which is one mighty contract. They have been kitting out the Army since 1967 and have made over 60 million garments for all sectors. Not only are all of these companies making money, but there is a whole line of suppliers that will also be benefitting from the Army orders. As the line goes further down you will have people supplying the materials needed to create all of these items. Yet more people benefitting from military spending.

When it comes to military spending we need to have a look at what is classed as adequate. Technically speaking, every dollar spent over the necessary level is a loss for the economy. Those living in a democratic world are lucky as the adequate amount of spending can be debated and each and every outcome can be discussed, whereas those living in non-democratic nations are at the hands of a few decision-makers that could end up making financially poor choices.